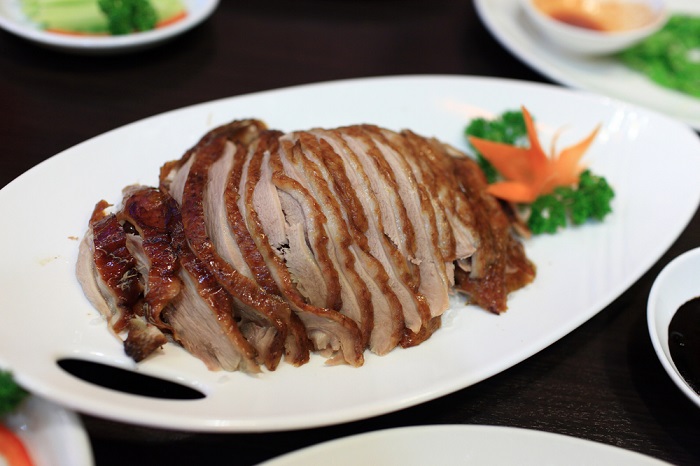 If you’re wondering what Peking duck tastes like, you’ll be pleased to know that we’re covering everything from its taste to texture in today’s article.

Peking duck is a famous dish, hailing from North China. It involves sewing the duck, inflating its skin, and roasting it in a woodfire oven. The result is perfectly crisp skin and tender meat that is served with Mandarin pancakes and condiments like hoisin sauce, black bean sauce, cucumbers, and spring onions.

There’s no reason to feel intimidated when you see Peking duck on a bistro menu; we are here to guide you about its flavor and how it’s distinct from the ordinary roast duck!

The taste of Peking duck is hard to explain because of the variety of flavors. Since the main ingredient is the duck itself, you can expect a slightly intense flavor as you’d get with a premium steak or any red meat. Besides this, you taste a gorgeous balance of savory-sweet ingredients, which mellow down the gamey flavor and enhance the taste of the tender meat.

What’s most interesting about the Peking duck is how well the crisp duck skin contrasts with the moist and tender flesh. The golden-brown slivers of duck skin taste crunchy at first bite, then instantly melt into sweet, smoky, and fatty goodness!

During the preparation, the duck is well-sewn so that the meat absorbs all the rendered fat and stays juicy; while the skin glazes. That’s where the duck gets its succulent flavor. You can serve it with several condiments like plum sauce, hoisin sauce, black bean sauce, and sweet soy sauce. The fermented bean sauce adds a salty taste, while the scallions, cucumbers, and green onions add a much-needed refreshing kick. Some chefs even like to go a step ahead and add applewood smoke to the duck to enhance the flavor.

In a nutshell, Peking duck is a rich-tasting dish with a glorious mix of savory-sweet flavors. The standout here is the crisp, honeyed duck skin and succulent meat. You can enjoy it with a variety of condiments for a delectable meal.

The Peking duck dish can be traced back to the Imperial era; it originated in Beijing. The authentic version of the dish would involve mainly crisp duck skin, served alongside a small serving of sliced meat. Flavor-wise, you can taste the zing of spring onions and hoisin sauce. It has an overall moist and tender texture.

On the other hand, roast duck is meat that’s cured and then roasted in a closed or hung oven. Roast duck is usually served with rice, noodles, and a special sauce. The meat is wrapped in crepes alongside fillings like cucumber, spring onion, as well as sweet bean sauce. The taste of roast duck is comparable to liver or steak.

While roast duck consists of meat, which is marinated and then roasted; Peking duck is prepared by inflating air into a well-sewn duck to puff up its skin. Although both dishes originated in China, they originated in different regions. The area of origin influences their flavors, method of preparation, and serving styles.

The strong-gamey flavor of the Peking duck is more similar to the taste of red meat than chicken. Duck meat has a deeper-red color than chicken, which is why it’s considered red meat. It’s also cooked and served medium-rare, so its color remains dark.

Overall, many people find the sweet and rich flavor of Peking duck closer to beef or turkey than white meat. Texture-wise, it’s tender, juicy, and fatty, making it a hit among most meat-lovers.

Peking duck noodles are standard at most Chinese restaurants for their incredibly delicious taste. Chewy e-fu noodles are stir-fried alongside Peking duck till they soak up all of the duck’s spices. The heavenly aromas and lip-smacking flavors make it an excellent choice for a quick snack or a yummy treat for children and adults alike.

The sweet and savory flavors of the duck shine through each mouthful, while the wonderfully fatty and tender meat adds the perfect cherry on top!

Get a taste of Chinese’s treasured dish in under a minute with Nissin Soba noodles in the Peking duck flavor!

The sweetness of the Peking duck usually comes from ingredients like hoisin sauce or black bean sauce. You may also serve it with sweet soy sauce or plum sauce. The traditional method involves serving the crisp skin and tender meat along with other fillings in delicious pancakes. That’s why Peking duck is usually served as an appetizer or a sweet treat to devour throughout the day. Overall, the taste is a balance of rich, savory-sweet flavors.

Peking duck is truly a treat that’ll enchant your taste buds as it provides a mix of moist and fatty mouthfeel. You get a honeyed flavor of the golden-brown skin along with the tender protein. Don’t confuse it with roast duck, as Peking duck is prepared differently; therefore, contains different flavors!

Peking duck makes for a mouth-watering main course, but you can also have it as an appetizer. It has a distinct, bold flavor that is closer to red meat than chicken.

Give this signature Chinese dish a shot to get blown away by the delectable flavors. Serve it with some julienned cucumber, shallots, leek, and some special dipping sauces, all wrapped in some Mandarin pancakes. It’s truly a treat to consider!