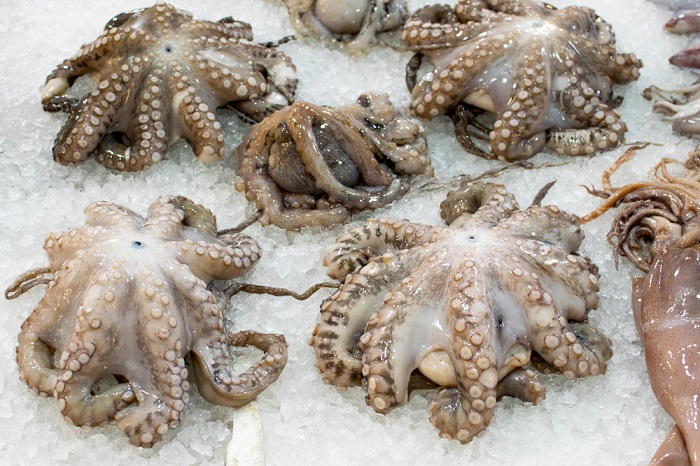 The tentacles are one of the most commonly eaten parts of the octopus. But, what about the head; is the octopus head edible or not, and what does it taste like?

The good news is that the head meat is one of the most flavorful parts of the octopus; you must remove some parts before cooking. It’s an excellent nutrition source and is a delicacy in several parts of the world. Texture-wise, when cooked properly, octopus head doesn’t taste slimy or tough.

Keep reading to learn more about its flavor, texture, and other questions you may have about the octopus head.

The octopus head is a popular delicacy among Koreans for its succulent meat and tantalizing flavor. It has the most flavorsome flesh than the rest of the body. Moreover, it’s linked with good nutrition and is also known for its aphrodisiac properties!

Like the octopus tentacles, the head is also quite tasty and makes for a fancy meal. The flesh is less tender than that of the legs, but more flavorful. Undercooked meat may be slightly tough; therefore, you must cook it to perfection. When cooked appropriately, the meat picks up the flavor really well.

As you would expect, the meat of a fresh octopi head has a sea flavor; it tastes salty and has a subtle sweetness to it. Moreover, the flavor on its own may be very mild, but once cooked with other ingredients, the meat picks up the flavor really well. You may find the texture and taste quite similar to other forms of meat, such as chicken and even pork!

You may even serve up a whole octopus with the head and tentacles intact. However, you must clean it thoroughly before cooking and serving.

Can you eat octopus head?

When raw octopus is served, you may notice the tentacles squirming. Given that image in mind, it makes complete sense if you’re wondering whether the head of an octopus is edible. It may be quite surprising for many to know that besides the tentacles, the octopus head is also included in cooking and serving and is fit for consumption.

However, in the last decade, it was noted that cadmium, a carcinogen, is present in high quantities in the octopus head. This toxin is poisonous to the liver and kidney.

Keeping this in mind; it’s imperative to clean the octopi well before cooking and consuming. When cleaning it, discard the internal organs, such as the ink sac, intestines, and beak. However, this means taking away much of the flavor. Therefore, many restaurants serve the head as is without removing the harmful organs, which can pose a serious threat to the health.

Moreover, the cleaning process is also a tedious task. That’s why it’s better to buy the frozen version of the octopi instead of purchasing fresh octopi from the fishmongers.

Another question many people ask is, “Can you eat baby octopus head?”

Well, it comes down to choice and one’s ethics; otherwise, baby octopus heads are also edible. In fact, it’s quite a decadent appetizer. Baby octopi are also easier to handle because of their smaller size and take lesser time to cook.

Nakji is a popular Korean dish which features baby octopi and its head. The spicy, stir-fried dish is quite a hit among the Koreans for creating a harmony between seafood and spices.

However, the head of baby octopi is milder in flavor than the tentacles and the meat is also thin and not quite substantial. Nevertheless, it can still be a small but decent appetizer on the table!

The taste of an octopus head is more flavorful than rest of its body. The flavor is comparable to chicken, pork, lobster, and even crab.

So, if you’re bored with the tentacles and want an extra dimension of flavor, try out the octopus head. You can pan-fry it for a caramelized flavor or try the other cooking methods like boiling, poaching, braising, roasting, grilling, and frying.

Whether to eat a baby octopus head is a matter of ethics and choice; nonetheless, several people consume it around the world. But, for safety, clean it properly to remove the beak and ink sac. To avoid this hassle, you can find frozen, pre-cleaned octopus heads, which are easier to work with!