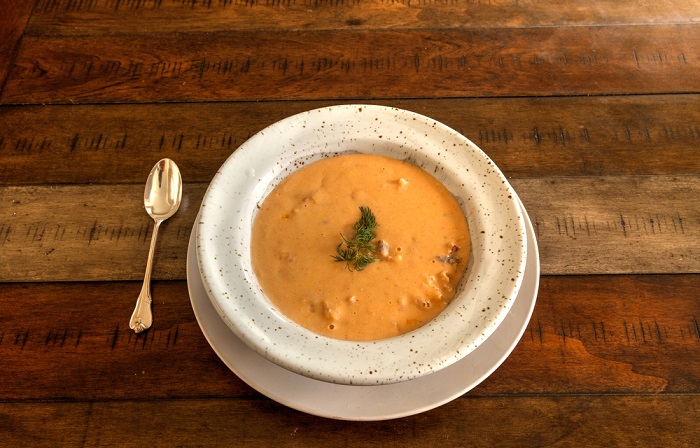 Lobster is often touted as a luxury food item; therefore, very few have tried it before. If you’re curious to know what lobster bisque tastes like and how it’s served, you’re in the right place.

Lobster bisque is a rich and succulent soup made with lobster shells, aromatics, and spices. The pureed broth has a luscious texture and a mild seafood flavor, followed by a slight kick of heat. It’s a perfect dreamy indulgence for a restaurant-like experience at home.

In this article, we’re going to cover all about the lobster bisque: its taste, texture, serving guide, and more! Let’s get started.

What is lobster bisque?

Lobster bisque is a classic aromatic French entrée. It is a creamy soup made with a long-simmered lobster stock comprising whole lobster shells and a blend of other flavorful ingredients. Lobster shells infuse their flavor and create an aromatic and decadent stock. This stock is strained and then thickened with heavy cream or rice.

The soup base is typically a mix of onion, carrots, celery, and herbs that are mixed with the delicious broth of lobster shells and meat. The resulting product is a velvety bisque that is satisfying, indulgent, and oh so fiery! You get chunks of flavorsome lobster in each mouthful!

You may find different variations, depending on where you’re having it and where the inspiration has been drawn from: England, France, or New Orleans! Nonetheless, you’ll find the same creamy consistency, wherever you go!

You can serve it as a delectable entrée or as a luscious and warm starter for any special occasion, such as Christmas or Valentine’s Day.

Lobster bisque may taste complex at first, but is actually made with some basic pantry staples.

The taste is exactly like a buttered lobster; both sweet and savory. Since butter is a major ingredient in bisque; it adds a soft and moist texture to the lobster, making it silky, sweet, and succulent. You can almost tell that the lobster has been cooking in butter and cream from its juicy, sweet taste!

If you have eaten different crustaceans, you know a lobster is quite similar to a crab and shrimp in its flavor. The taste is quite similar to that of a shrimp, but in terms of meat, it is both firm and smooth. It is also slightly chewy because lobster meat has a spongier texture.

Since the stock is made using shells of the lobster, you get a mild seafood taste in the cooking liquid, along with tons of other flavors. You can taste the flavors of different key ingredients in well-cooked lobster bisque. For example, it may have hints of caramelized onion, celery, carrots, and bell pepper. These add a satisfying sweet and savory flavor to the soup.

Other flavors include a mild sweetness that comes from a deep roux, which adds fat and flavor to the soup base. It helps create a smooth yet thick consistency. The roux, together with the lobster, add a mouthwatering umami flavor. On the other hand, the heavy seasoning gives the bisque a rich and flavorsome taste.

The meatiness of the lobster and sweetness of the base go hand in hand in lobster bisque.

Some recipes also call for the use of tomato paste and wine, which add a sweet flavor to the base. In comparison, garnishing ingredients like fresh tarragon and chives add a unique freshness to the bisque.

Lobster bisque has a creamy and hearty soup-like consistency. The vegetable mix adds texture to the roux, whereas the heavy cream gives a luscious richness to the soup! Some people add rice as a thickener to the bisque, which creates a starchy consistency. While lobster meat tastes fantastic as it is, you can also toss it in garlic and cayenne pepper to add a slight kick of heat to the bisque!

In a nutshell, the standout flavor in this bisque is the taste of the sea. The lobster stock is infused with a seafood flavor that comes from the lobster tails and shells. Together with the sweet roux and mirepoix, you get a creamy puree that gives a luscious and velvet-like texture to the bisque. The result is a bisque so addictive it would tantalize those buds.

If you’ve never tried lobster bisque before, there’s no reason to wait for a special occasion!

Lobster bisque is typically served as warm; some may even serve it at room temperature or when cold, but never piping hot. That’s because heat can ruin the delicate flavors and creamy-smooth consistency of a bisque. Moreover, the thickness of the bisque makes it hold the heat for longer.

Typically, lobster bisque should be served hot, after adding the lobster, so that you can taste the rich flavors. For leftovers, you can simply reheat the bisque by simmering it at medium-low heat, stirring occasionally to prevent curdles.

Cold bisques taste great too, as long as the flavors still come through. To serve cold, set the bisque in a chiller or refrigerator until it reaches the desired temperature.

Ideally, you should freeze the bisque without adding the cream, and then mix it when reheating.

Lobster bisque is a decadent and incredibly flavorful appetizer, perfect for any occasion! Taste-wise, it has a decent balance of sweet and savory from the various ingredients that go into making it. It gets an umami meaty flavor from the lobster chunks and a sweetness from the caramelize vegetables.

The lobster stock contains tails and shells, which have a rich and aromatic flavor to it. Mixed with roux and vegetables, you get a fatty texture, and a lip-smacking, savory-sweet taste. The mixture is then blended out to create creamy and smooth bisque, which is topped with chunks of buttered lobster meat.

You can serve it hot or cold, depending on your preference. But, typically, lobster bisque is served warm so that all the flavors come through.

Lastly, top it with a pinch of herbs for some freshness!