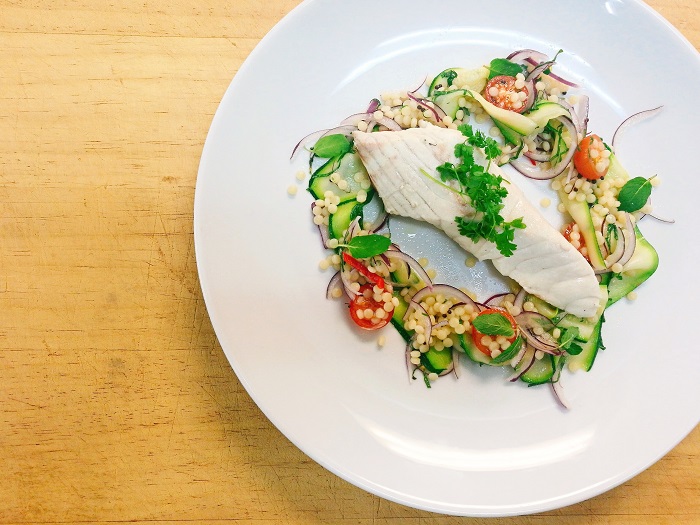 If you’re a seafood-lover, you’re probably already familiar with cod or salmon, but do you know what hapuka tastes like?

Hapuka is an ocean fish and a member of the Grouper family. The large fish is often found in deep waters around Australia and New Zealand. In terms of appearance, the fish is thick-bodied, with a silver and blue or pink and silver combination of outer skin.

If you’re eager to learn more about its flavor, texture, and how it’s best eaten, you’re in the right place. In today’s article, we’re going to explain everything you need to know about the hapuka fish.

Contents hide
What does Hapuka taste like?
What is the difference between hapuka and bass?
Conclusion

Taste-wise, hapuka may be compared to a bass because of its delicate flavor and sweeter undertones. When cooked the right way, with its skin on, its flake tends to have a cream-like texture. The tender fish almost instantly melts in the mouth! The best part about hapuka is that it doesn’t taste or smell fishy, yet it’s rarely eaten raw.

Its superior flavor and texture makes it one of the most-sought after deep-water species, reaching top value locally and internationally, making it slightly pricey. If you’re looking for a sweet-tasting fish with a mild flavor profile, then the hapuka pairs up really well with a glass of Rosé!

Since the fish holds together well and is quite firm in texture, it’s quite fun to work with. The thick flesh and meat soaks up dressings and marinades really well, which means there are endless ways to cook up the hapuka fish.

While the smaller fish are more sweet and delicate, the larger and flakier hapuka have a juicier flesh. Hapuka’s large and chunky flakes are closely similar to those of lobster or crab.

Compared to other species, hapuka has high oil content. Before you’re grossed out, read on! It’s this oil level that gives the fish a pleasant, buttery-soft texture. Because of the higher moisture content, cooked hapuka are soft and moist on the inside. It easily comes apart with a fork. You’ll rarely ever hear of a dry hapuka filet!

The larger catch is easy to fillet and tastes great when pan-fried or barbecued. The fish has a rich taste, with its filets firm and pearly-white. Several people prefer having it as steak cuts; but its most flavorful and moistest parts are the wings, throat, cheeks, and bellies.

To put it simply, hapuka is among the lightest fish, with a very minimal taste profile. In terms of texture, the flesh is quite tender and comes apart as flakes. All thanks to its high oil content and moisture level, it stays soft on the inside and doesn’t taste “dry”. It hardly tastes or smells “fishy”, and instead has a faint sweetness, which is like that of a crab.

What is the difference between hapuka and bass?

Flavor-wise, hapuka seems to be a cross between bass and halibut. Both hapuka and bass are deepwater species, mostly found around New Zealand, and are closely related. So much so that Hapuka is also known as bass in some parts of the globe. The “big boys” are also quite popular for how good they are to eat.

Although hapuka and bass are quite similar, appearance-wise, they’re distinct in several ways. The former is greyer, and also longer than bass. Hapuka fish also have a protruding and elongated jaw, while bass have a shorter jaw. Moreover, hapuka meat is pearl-white, whereas bass is grey-brown on the inside.

There’s a reason hapuka is one of the best-tasting fish in the world. If you’ve tried sea bass and halibut before, you’ll find the flavor profile quite similar to the two.

It’s a standout in terms of how moist its flesh is. The fish, with its mild flavor and buttery texture, is a top favorite at restaurants across the globe.

If you’re into seafood that has sweeter undertones, hapuka is an excellent choice. There are several ways to cook up this in-demand fish. Hapuka particularly tastes great when crumbed and pan-fried, although you can also bake, roast, and grill it. When coupled with lime juice and garlic butter, anyone would be compelled to finish their meal with a chef’s kiss!

We hope you’ve understood what hapuka tastes like and are interested in trying it out in the future!