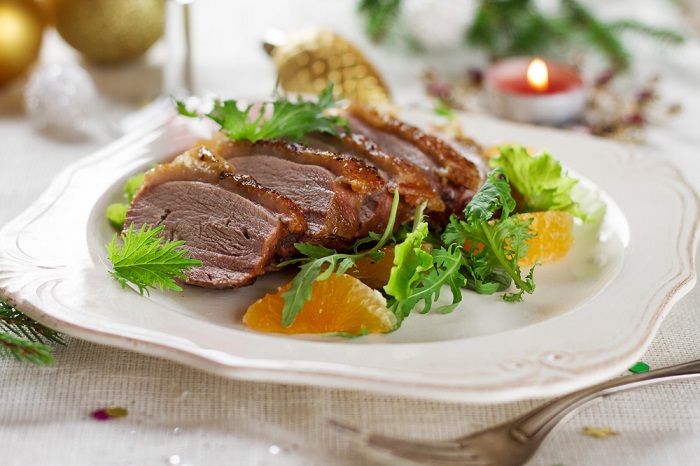 If you’re just beginning to catch up with the rest of the world and are wondering what duck tastes like, we’re here to help you!

Unlike chickens, ducks have a bold and gamey flavor like red meat. It tastes sweet but with a hint of umami and savory flavors, like liver. Overall, it has a tender and moist texture, and since it’s versatile, there are several ways to cook it up! If you’re worried about the meat tasting wild, you can try different breeds or brine the meat before cooking for a less gamey flavor.

In this article, you’ll get to learn what this game bird tastes like and the best varieties to try!

Duck flavor is unlike anything you’ve ever tried; it’s different from chicken or turkey. Although they have lesser fat content, they’re rich in flavor. While the taste varies according to the breed and whether you’re a wild or farmed duck, the taste of its meat is intense and sometimes gamey. When you take a mouthful of duck meat, you’ll instantly notice a sweet flavor with hints of umami and savory-salty notes. Most people find the strong taste similar to a liver or premium steak!

Even though ducks and chickens are considered to be quite similar, you’ll notice duck meat to have a stronger flavor, unlike the bland taste of chicken. Its flavor is closer to red meat because of its gamey and wild nature.  Nonetheless, when cooked using the appropriate method, this gamey bird turns into an incredible flavorsome and tender meat with the perfect mix of fat!

The cooking methods you use to prepare duck meat can also influence its taste largely. Since duck meat has a firm texture, it’s best to prepare it by roasting or slow cooking. This method yields tender and juicy meat. However, the most common and traditional method to cook up the game bird is using the French technique called Duck confit. It involves curing duck legs and gently cooking them in duck fat. This technique not only adds beautiful flavors but also prolongs the meat’s shelf life. Another way is to sear the duck breast in olive oil and seasoning for a simple yet flavorsome dinner.

Since it’s a versatile piece of meat, there are several ways to cook up this gamey meat. Let’s take a look!

One of the most popular ways to cook duck is through roasting the flavorsome meat! The strong meaty flavor is pretty similar to the taste of beef or turkey. When roasted, the duck retains the fat, making the meat juicy and tender, while its skin turns crisp and glazed.

If you’re looking to enjoy the rich and dark meat, it’s best to have it roasted! You can marinate the bird in various spices and ingredients, such as garlic, lemon, freshly ground black pepper, thyme, rosemary, and finish it off with a honey-balsamic glaze!

Duck roast is a holiday classic; it contains an intense meaty richness with a savory-sweet flavor coming from the juicy meat!

Who doesn’t love some bacon?!

Made from cured and smoked duck breast, duck bacon is a flavorsome treat! But, don’t be fooled; you won’t get the same crispness as you get from pork bacon. That’s because duck is relatively less fatty, and hence, duck bacon is slightly thick and chewy.

Cooking it for longer will do no good because instead of crisping up, it’ll become tough and dry!

However, overall duck bacon is a delectable treat because of how flavor-rich it is! Although it’s chewy, we don’t mind the texture because it’s pretty close to the real deal.

With the world moving towards plant-based proteins, we’d like to introduce you to “Mock Duck,” a gluten-based meat substitute (seitan). It’s prepared using a mix of gluten, oil, soy sauce, and seasoning.

The taste of mock duck is subtle and savory, usually with a hint of a vaguely wheaty flavor. Flavor-wise, it’s similar to bland chicken or Portobello mushroom.

Although the “wheaty” flavor may not appeal to many, the good thing about seitan is that it absorbs marinades well. When cooked right, it turns tender and develops a distinct meaty texture.

Duck meat has an intense, wild flavor, similar to the taste of red meat. This wild flavor is often described as somewhat ‘gamey’. Generally, wild ducks taste a lot gamier than farmed ones because of the difference in their feed. Additionally, the type of breed may also influence the meat’s flavor.

When prepared through the appropriate technique, this ‘gamey’ meat turns incredibly succulent and flavorful. Its fat adds a beautiful, tender texture and distinct flavor of ducks.

If you want to tone down the gaminess of the duck, brining it in a mix of salt and spices will help!

This specie has no “wild gamey” flavor and makes for a fine meal! Besides tasting delicious, the meat also has a fine texture. The taste of this variety is similar to a tender filet of beef!

The wood duck makes for a fine-tasting piece of meat; it’s one of the best options for grilling. The wood duck is tender, juicy, and less gamey than other breeds.

Although slightly gamey, Pintail ducks have wonderfully juicy and tender meat. They taste fantastic when grilled or fried; make sure to brine and marinate the duck before cooking, for best results.

Mallard ducks are one of the most popular species out there! It has a slightly coarse texture but is a fantastic option, especially if you want a higher meat-to-bone ratio!

The Gadwall duck has rich and flavorful meat, with a slightly wild flavor. It tastes delicious when roasted after brining!

As ducks have a well-balanced ratio of meat and fat, you get lean meat with a tender and moist texture. Although it’s not as mild-tasting as chicken, it’s rich-tasting with hints of sweet, umami, and savory flavor notes.

Since ducks are a versatile piece of meat, you can prepare them in several ways. While the best method is the French Classic called Duck Confit, you can also sear, grill, or roast the meat to enjoy its bold meaty flavor.

Now that we’ve answered your question, “what does duck taste like,” we hope you’ll try experimenting with this flavorful meat!