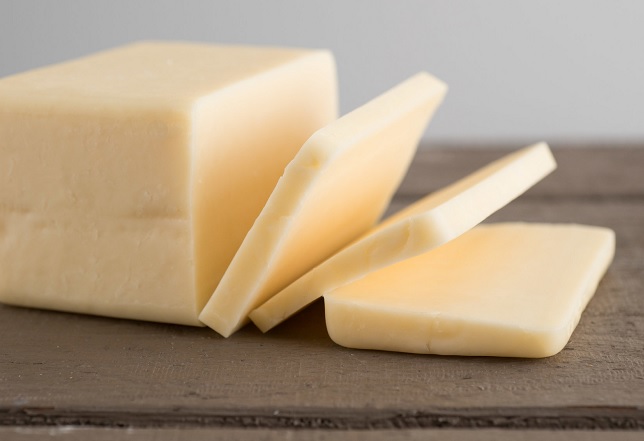 Brick cheese is known for making authentic Detroit-style pizzas. Even though you might have tasted it many times (knowingly or unknowingly), you may wonder what brick cheese tastes like.

Brick cheese is a mild-flavored cheese with subtle salty, nutty, and earthy flavor notes. With a semi-hard texture and a capacity to melt, it comes highly recommended for making sandwiches, burgers, pizzas, and more! If you’re looking for a cheese that adds more than just texture, this one’s for you!

If you have never tried this cheese before, this article will tell you what to expect from its taste at your first bite!

The mild, buttery flavor of brick cheese makes it a perfect choice for a Detroit-style pizza!

Made with pure cow’s milk, this cheese is widely praised for its semi-hard texture. It contains a high-fat content, which gives it the perfect melt quality. The taste and texture of brick cheese are comparable to Tilsit or Havarti.

Bear in mind that the cheese’s exact flavor depends on its length of maturing. Therefore, you must check how long brick cheese has aged before purchasing it, as it can impact the taste of your dishes. Aged brick cheese tastes delicious with subtle nutty undertones but may smell intense, pungent, and tart. On the other hand, fresh or young brick cheese doesn’t taste as complex; you’ll get a mildly sweet or almost bland flavor with a texture that’s semi-soft and crumbly.

Overall, this high-fat pate brings a unique blend of flavors that range from sweet and buttery to tangy and salty! Although plenty of cheese options are available, none comes close to brick cheese in terms of its high-fat, buttery taste and texture. Choosing any other type of cheese would mean missing out on the authentic crusty and almost blackened edges that give Detroit-style pizza its much-loved caramelized flavor!

Although you may find this particular variety of cheese in the market today, it lacks the distinct, traditional flavor standard of authentic brick cheese.

What Is Similar To Brick Cheese?

Some of the brick cheese substitutes are:

Cheddar cheese is pretty similar to brick cheese as they share a similar fat percentage. Cheddar is one of the most versatile types of cheese available worldwide. It’s most commonly eaten as a standalone snack; however, you may use it in dips, soups, sauces, or melted over savory snacks. Young cheddar has a mild flavor, but the taste sharpens as it matures.

Limburger cheese is another fantastic option for substituting brick cheese. However, it sure has an intense aroma that may put you off. The smell is yeast-like; nonetheless, the flavor isn’t quite as overpowering unless you allow the cheese to age for longer. Limburger cheese is popularly used in the European region.

Mozzarella, known to the world as pizza cheese, is another perfect substitute for brick when whipping up a pizza. With a mild taste and creamy consistency, this melted cheese goes well on almost all savory foods.

Muenster cheese is another option you can try since it’s mild and neutral-flavored cheese that melts easily.

Brick cheese and mozzarella are the top choices for making pizzas. Most pizzerias use mozzarella when the former isn’t available.

Although similar, brick cheese is more of a cross between Monterey Jack, cheddar, and Limburger. Moreover, the cheese melts into velvety goodness but with a pronounced, nutty-tangy flavor and aroma.

Another difference is that brick cheese is available as young and aged versions. The flavor is pretty mild when the cheese is young, but once brick cheese ages, its taste, and odor intensify, much like Limburger cheese.

This brick-shaped cheese from Wisconsin is best known for its neutral flavor. Young brick cheese has a sweeter taste but develops a bold flavor similar to cheddar once mature.

With an easy-to-slice and meltable texture, this is one of the most widely used varieties of cheese, especially for putting together a delicious grilled cheese sandwich. Brick cheese’s subtle tangy nuttiness pairs well with pickles.

The highlight of this cheese is its easy-to-crumble, sticky texture that melts well and instantly adds a burst of flavor.