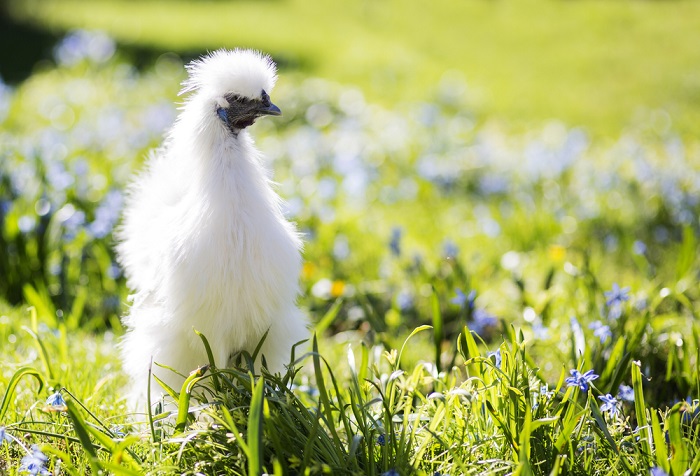 Black silkie chicken lets us experience the chicken flavor with rich twists and turns. The taste of this chicken is deep, but at the same time not so fatty.

Feeling interested in this exotic flavor? The meat, skin, and even bones of black silkie chicken are black. These fowl make excellent pets due to their beautiful plumage and docile nature.

What is Black Silkie Chicken

As mentioned above, silkie chicken has black skin, meat, and bones. We believe that this fascinating breed originated in China, India, or Japan. They have silky feathers that resemble soft rabbit fur. Their black color results from a condition called fibromelanosis. This rare genetic mutation causes hyperpigmentation.

Silkie chickens are mild-natured birds. This behavior makes people keep them as pets. These birds are famous for their excessive brooding nature. This attribute lets us use them for hatching eggs of other birds. Another intriguing character of these birds is their polydactyly, extra digits in their feet.

The meat of black silkie chicken has a gourmet reputation in Chinese cuisine. It is one of the beloved ingredients in other South East and East Asian countries. People rear this fowl for not only their meat but also for the eggs. They don’t need any specific care and are easy to grow. The eggs have larger yolks that make them extra delicious.

A downside of rearing black silkie chicken is their slow growth rate. As these fowl don’t achieve a considerable size, commercial rearing is almost non-existent.

How is Black Silkie Chicken Different from Regular Chicken

Black silkie chicken doesn’t have much difference from our regular chicken. The taste is slightly different, and it holds some nutritional benefits.

Black silkie chicken contains higher iron content compared to the normal ones. In Chinese medicine, this ingredient gets used to cure Gynec problems. Iron content could be the reason behind this.

Another benefit of black silkie chicken that the lack of the regular is the amount of carnosine. This anti-oxidant can improve your muscle strength and boost immunity. It may also improve the functioning of the nervous system.

Black silkie chicken has a characteristic taste that mildly differs from the general chicken. It has the usual chicken flavor. But the depth of the flavor is on another level. Some may say that it has a certain amount of gaminess to it. The reason could be that most silkie chickens available are free ranged ones.

Silkie chicken offers leaner meat than the regular ones. So it falls short on the fatty taste. Less greasiness doesn’t affect the addictive nature of silkie meat. Low fattiness gets compensated by the distinctive deep flavor.

Roasted black silkie chicken tastes almost the same as the common ones. But the flavor takes a turn and tastes a bit like a duck. This flavor imparts an exotic tinge to this ingredient. It put forward an appealing flavor if you crave a little robust taste. But remember that it tastes the same as chicken, though the flavor has a deeper tone.

The burst of umami the silkie chicken have elevates the delicate taste of chicken. This tender meat melts on your tongue and leaves a lingering flavorous punch. You can also sense the subtle sweetness of the chicken. This mild sweet taste is a characteristic feature of chicken.

You can use silkie chicken in any of the usual chicken recipes. However, some unique dishes turn this chicken to perfection.

Chinese herbal soup using black silkie chicken tops the list. The meat gets boiled with jujubes, angelica, dangshen, goji berries, longan, and ginger. The broth has an umami-bustling nature that comforts every single cell in your body.

Thai silkie chicken curry unveils an embrace between deep chicken flavor and coconut. The chicken cubes get added into sautéed onion and Thai green paste. This chicken goes into gravy made with coconut milk, lemongrass, lime grass, and basil.

You can roast silkie chicken in the oven as well. Dress the chicken with garlic, butter, salt, black pepper, and others condiments of your choice.

The black silkie chicken tastes almost the same as our ordinary chicken. But it also has a bold flavor that may feel a bit gamey. This meat has a lower fat content and has many health benefits. The rich iron content and anti-oxidants make it a favorite for many people.

Silkie chicken gets its black color from a natural phenomenon known as fibromelanosis. Many Asian countries use it as a priced ingredient in their cuisines. Chinese herbal soup is a tasty dish that uses silkie chicken. You can substitute it with the ordinary chicken in any other recipe.