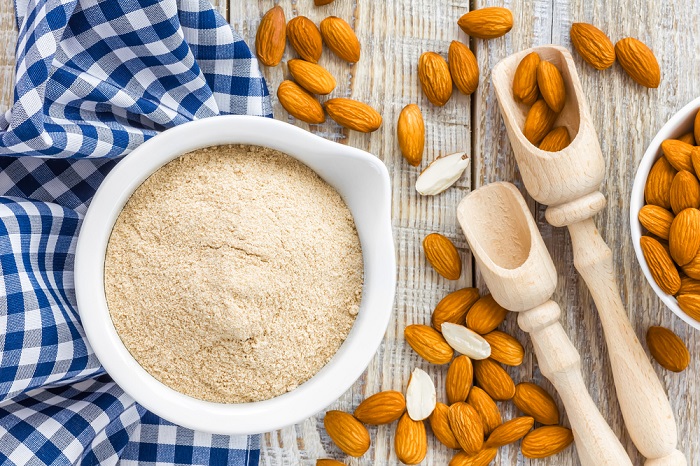 Almond flour is a healthy alternative to traditional wheat flour. Before jumping on the bandwagon and switching from regular flour, it’s important to first find out what almond flour tastes like?

Almond flour is made from almonds that are first blanched, then ground, and finally sifted to form a fine flour. It’s sweet-tasting, low-carb, and nutrient-rich; almond flour packs several health benefits, as well. Compared to regular wheat flour, almond flour has a different consistency and isn’t as powdery.

If you’re looking to learn more about its taste, this article will cover everything you need to know!

The flavor and texture of almond flour are well-appreciated by all. Unlike regular wheat flour, which is neutral in taste, almond flour adds a delicious nutty flavor and aroma. You can use it in sweet and savory dishes like pie crusts, cakes, cookies, bars, bread, or meatballs (for coating) for a mouth-watering and decadent taste!

As the name suggests, almond flour has the same bitter-sweetness and nutty flavor profile as the nut itself. When paired with other ingredients, the flavor combinations work well in yielding delightful treats!

The best part is that almond flour adds a rich, nutty taste and aroma to your dishes. Since it has a higher fat content than regular white flour, it adds moisture and enhances the taste of your recipes, as well. So, in a nutshell, the sweet and almond-like flavor is essentially an asset in dessert recipes, as it prevents baked goods from drying out. Almond flour makes most recipes taste better because of its unique flavor profile!

Almond flour has made waves for its gluten-free and paleo-diet-friendly quality in the last few years. But, did you know it’s been around for longer than you know! The classic French dessert, Macaron, is made using almond flour! The primary reason for its popularity is how nutrition-rich it is; it is a rich source of manganese, vitamin E, protein, fiber, and much more.

Since almond flour is made from blanched, ground almonds that are powdered to form fine flour, it tastes just the same as the nuts, but only mildly.

However, since the almonds are blanched first, it loses the “strong almond flavor,” but not entirely! You can expect a balance of sweetness with a mild hint of bitterness, but only in a gentle way.

Since almond flour retains its natural flavor well, it gives a pleasant nutty taste to anything you add it to! The nutty flavor pairs perfectly well with baked goods, such as bread, cookies, biscuits, brownies, cakes, and more! What’s more is that almond flour has a versatile taste that works well with both sweet and savory dishes.

When you toast almond flour, it develops rich and deep notes that mimic the actual flavor well. So, while regular flour is mainly tasteless, almond flour tastes a lot like almonds.

Almond flour has a naturally sweeter and nuttier taste profile than traditional wheat flour, which doesn’t come as a surprise. It has the sweet and slightly bitter flavor of almonds. But, no one bag of almond flour tastes the same! Certain almond flour manufacturers also add almond extract to the flour to add a pronounced almond flavor and aroma. So, you may find different-tasting bags of flour.

But, on the whole, almond flour usually tastes sweeter than regular flour.

Almond flour has a distinct bitter-sweet taste, compared to regular flour. Wheat flour has a neutral flavor that works well in all recipes and doesn’t alter the taste in any way. Almond flour, on the other hand, doesn’t have a neutral taste; it adds a nutty flavor and smell to the dishes, without being overpowering.

Besides taste, almond flour and regular flour also have different consistencies. Gluten, in regular wheat flour, is the main differentiating component. It’s the protein that makes regular flour stretchy and fluffy. Almond flour is gluten-free, so while the baked goods may not turn out as fluffy, it’s still an excellent choice for cookies, brownie bars, and pie crusts! In short, anything you use wheat flour for can be made using almond flour; however, you will notice a few textural and taste changes.

Almond flour is the perfect substitute for regular wheat flour for anyone going on a gluten-free diet or simply looking to add flavor. The nutty-sweet flavor profile is perfect for baked goods because of its unique taste and texture. When you add almond flour to brownies, they end up incredibly fudgy.

It doesn’t only pair well with baked treats; you can use it in place of bread crumbs for a crispy coating on meats like chicken and fish!

But, in the battle of almond flour vs. wheat flour, it’s important to note that while almond flour is low-carb, it has higher calories than regular flour. Moreover, it doesn’t have the same nutritional makeup as wheat flour.